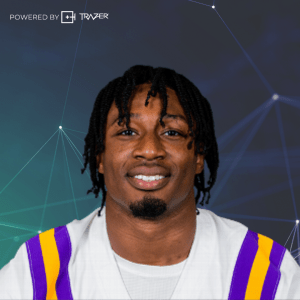 “Whatever you want to do, just believe you can do it… and by the grace of God, you will do it” said Bolanle, the mother of LSU’s star defensive end BJ Ojulari, as he forged his own path with football, and ultimately toward a journey that could lead to the glory of the NFL. Ojulari is the grandson of a Nigerian Prince, descendant of a King, Brother of an NFL linebacker and a key pass rusher for the Tigers who was brought up under the influence of inspiration from his royal#nbsp;grandfather, Twins Seven-Seven. “You are a prince,” Twins Seven-Seven said, “Whatever you want to achieve, go and get it. Whatever you want to be, go be.” It is because of Ojulari’s dedication and successes that he crossed paths with TRAZER, connecting with our team over#nbsp;leaving a mark on this world through positive impact.

In integration with the talents of the LSU coaching staff, TRAZER is a vital game changing technology that drives optimized movement and performance. Ojulari’s interest in technology and desire to leave a legacy aligns with TRAZER’s vision, and we are honored to play a role in his future endeavors both on and off the field.

“I’m focused on getting better every day. Learning about new technologies like TRAZER that can improve not only my performance, but is also making an impact for so many others as well is exciting. I look forward to working with the TRAZER team on future development and ways continuously improve the experience,” said Ojulari.

Barry French, TRAZER CEO said “BJ’s character, personality and work ethic are going to lead to a lot of wins on and off the field. BJ’s passion and energy for the game are contagious and motivate his teammates and those around him. It was awesome talking with him and hearing his story and goals. We couldn’t be more excited to work, grow and support him along his journey.”

Our team looks forward to celebrating all of Ojulari’s successes into the future, and we are proud to support him on his journey.